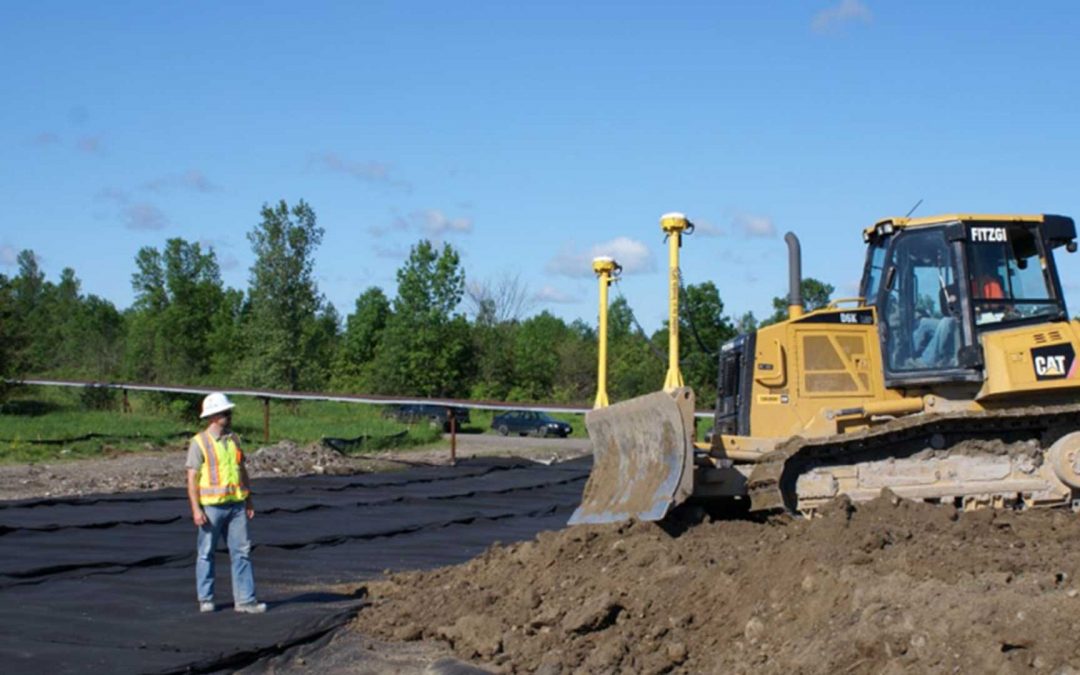 It’s the brains and the heart. Without it, nothing happens. “Having powerful, current software embedded in the technologies we’re using allows us to be in control of the jobsite, achieve precision grades, increase productivity, and essentially shift the way we conduct our business,” states Wally Stanton, project supervisor, with Len Corcoran Excavating, Ltd., Elginburg, Ontario. “We’ve been Trimble technology users since late 2005, but their more sophisticated software of the past couple years is allowing us to do things we never thought possible,”

Len Corcoran Excavating’s construction technology usage has evolved. “At first, we took baby steps to get going and we weren’t really sure exactly how we were going to use it,” Stanton says. “We were becoming comfortable and at the same time Trimble developed easy-to-use systems that allow us to do more. Our usage of GPS machine control, data collection, and site positioning has gone up exponentially.”

Stanton reports that there has been more opportunity to use the technology based on the type of work they are capable of handling. “We’re working to integrate the Trimble technologies more and more into how we normally approach our business.

“A current project that demonstrates the advantages we’re realizing with the Trimble systems is a massive landfill remediation project in Kingston, Ontario, Canada,” Stanton states. “We’re replacing a 10-acre cap on a CKD (cement kiln dust) landfill and digging a run-off drainage ditch around the perimeter.” Corcoran Excavating started work the last week in May 2010 and expects to finish before mid-August.

The engineering firm for the project created a site plan that Corcoran Excavating obtained as an Adobe Acrobat PDF file. Using Trimble® Terramodel® software, Stanton converted the plan into a 3D model that has been instrumental in all phases of the project.

“The engineers presented quantities of material,” says Stanton. “But it’s important to me as an estimator, project manager, and onsite foreman that I have a clear understanding of exactly how the material will be moved on the site.” Having first-hand data, according to Stanton, allows him to better price or cost-estimate a job.

There were some discrepancies between quantities presented in the tender package and the data Corcoran collected on the site and ran through Terramodel. “From my past experience I’ve learned that I can take my Terramodel numbers and run with them. We don’t always use what the engineering company has put forth. I like to verify it on my own with an independent check. So, we definitely did that,” Stanton says. “Through our efforts, we definitely had more accurate surface models which I used for the actual grading of the project.”

The Trimble software helped Corcoran resolve a “definite lack of useable information” regarding the layout of the perimeter ditches.

“The ditching that they had proposed wasn’t feasible for the direction of the property flow. Terramodel allowed me to make adjustments to my surface models and present an alternative,” states Stanton. “If we waited for the engineering firm to come out with their third-party survey crew to reshoot the site and then convert their measurements into what we can use, it could take weeks. Using my Trimble equipment and software, I can turn changes around in half a day versus several weeks and have a new plan with which to move forward.”

Stanton also makes it clear that they are not professional surveyors. “We call ourselves construction grade and layout people, since we’re not necessarily measuring or laying out in the strict professional survey sense. We’re just trying to ensure that engineering drawings that we work off of are useable.”

The Lafarge Landfill project centered on the replacement of the existing cap material. The owners need to comply with current environmental regulations. The concern was that harmful leaching through the landfill could potentially make its way into adjacent waterways and ground water. A more permanent solution was required to prevent water from infiltrating the landfill, creating the leachate seepage. Comprehensive remediation to satisfy the landfill’s long-term management objectives was required.

“At the site SCS900 software helped us perform the whole calibration process and verify some of the existing topography as it was presented in the original data,” Stanton says. “We learned that quite a bit more material had been dumped on the site which wasn’t accounted for in the plans. So, it allowed me to raise a red flag right at the start of the project and to readjust accordingly.”

The Trimble technology not only helped Corcoran catch inconsistencies on the original plan before they began grading, it helped them save time and costs. “From a grade layout standpoint, I’m saving probably 80 percent of my cost in worker time,” states Stanton.

“Without the Trimble systems, I would have needed two fulltime people out there doing layout, putting stakes in, and taking shots. Instead, I literally used a general laborer, with no special training, who held the Trimble rover and was able to relay what the software was calculating in relation to cuts, fills and positioning to our equipment operators.”

Corcoran removed 18,000 cubic meters off the top of the 10-acre landfill site. The old capping material was placed in a stockpile to be reused.

“Once the old ineffective cap was removed, we needed to re-grade the kiln dust before placing a new cap on the landfill,” Stanton states. “We had a cut-to-seal quantity in the neighborhood of almost 20,000 cubic meters of packed silt. I had found a surplus of 4,000 cubic meters over the original design.” Corcoran was able to identify a fill area through the Trimble Terramodel plan that could be expanded to accommodate the surplus.

A dozer equipped with a Trimble GCS900 Grade Control System performed the grading. The tendered agreement has specific requirements for a low ground pressure dozer, and also an upper limit on what that ground pressure could be.

“The grading was very challenging since the CKD (concrete kiln dust) range from being dusty and flyway to hard as concrete to wet sections that have the consistency of toothpaste,” Stanton says. “There was no way of knowing exactly what may have been dumped there years ago. The owner couldn’t really guarantee what we would encounter, so there were surprises.” Additionally, the landfill contains a large quantity of rocks.

Achieving grade with the CKD is challenging. “Given the properties of the material we’re grading, we may get only one chance to put the dozer across an area,” states Stanton. “I’m definitely recording the finished sub-grade as we go, and I think we’re doing a heck of a job achieving the intended grade given the material that we’re dealing with.”

Adding complexity to the task the site being graded is rectangular shaped with a descending four percent grade from the top lengthwise side sloping down to the other side.

A 40 mil polyethylene membrane that measures less than one millimeter thick was to be laid first. Based on site conditions, Len Corcoran Excavating recommended a second layer of geo-synthetic filter-cloth material be placed to act as a cushion to help prevent any rocks from pushing up through the surface.

A final third layer is a geo-composite drainage layer. This is a type of plastic mesh and filter cloth combination used to help drain any water from the surface of the membrane.

Taken together, the three layers measure approximately a half-inch thick. The fill soil is spread on top. “The dozer with the Trimble GCS900 was used to ensure that the amount of fill used in the capping layer is accurate,” Stanton says. “There is a bit of a balancing act, because we don’t want to consume more than what we’ve stockpiled. We don’t want to waste the material, which is wasting money. Using Trimble meant that we did not waste money.”

An existing perimeter road encircles the landfill. The plan called for creating a catchment ditch alongside the road. “All they provided was a cross-section showing how they wanted it all to tie together, but they didn’t give me any actual grades,” says Stanton. “With my Trimble technology, it wasn’t complicated to capture the data, tighten up my surface models, and then dig it to the revised plan. I literally created everything while on the spot in the field. My ability to adjust the grading plan onsite quickly and to be able to move forward, and not have to wait for an engineer to do it for me has been for me the biggest advantage of the Trimble systems.”

Stanton credits the support and training he’s received since 2005 from their local Trimble dealer, Toromont Cat, Concord, Ontario, for the company’s ability to succeed with the technology. “Our dealer ensured we understood the Trimble software and how it helps us collect the digital information we need to be more accurate and productive on the jobsite.”

Those software technology advantages are keeping Len Corcoran Excavating on target to complete the Lafarge Landfill project on budget and on time.